Oh Jeeze, All That Cheese…

Success from start to Finnish

From September 22 to 25 the Swiss association was lucky to host around 40 international ag-journalists from all over the world to our Press Tour in the lush valley of Entlebuch. It was scheduled as an IFAJ/ENAJ-trip and organized mainly by former IFAJ-president Markus Rediger and his right hand Corina Burn. Co-organizers were Jürg Jordi, Alois Hodel, Roland Wyss, many more, and me Adrian Krebs.

We were super lucky with four days of great weather and an interesting program with a good mix of information and discussion about food security, farm and processing plant visits. There was also a look at Swiss tradition, including the annual alp descent (watched by 12.500 spectators) and many an occasion to taste cheese. One participant’s remark on this fact became the saying of the tour: “Oh jeeze, all that cheese!”. 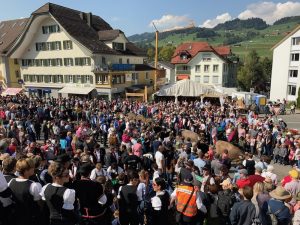 The folkloristic part of the tour was a big descent from an alp. 12,500 spectators watched it.

The main reason to organize the trip was a popular vote in Switzerland on the same weekend. The constitutional article on which we voted not only anchors food security in the constitution of the country, but also installs more protection for arable land and a demand for more sustainable imports.

As no big party or NGO opposed the new article, the vote ended with 78.7 percent in favor of institutionalized food security. A big success for Swiss farmers, who are often under pressure mainly by the mainstream media to be more environmentally friendly although they do a good job protecting their natural resources already.

Nevertheless, all the big newspapers campaigned for a ‘No’, mainly because, so they claimed, there would be no changes through a ‘Yes’. We will see, but the population gave the farmers a big “thumbs up” and it was good to have so many interested foreign colleagues with us to celebrate the result but also to get to know more about food security in their countries, particularly those where often there is a real lack of food; that’s something we never experience in our country.

Thanks to all the organisers and the participants from all over the world, it was a great trip!

[Video] Stopping the next pandemic: what can human healthcare learn from veterinary virology?

Stopping the next pandemic. How public health can benefit from the veterinary contribution?

European Union flags in front of the European Parliament in Brussels, Belgium

Europe’s media in the digital decade